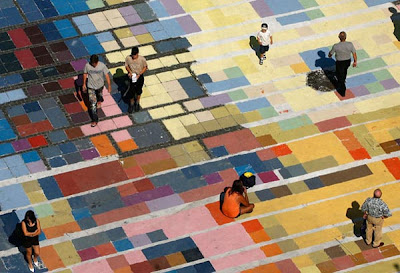 (translated by the author from the orginal portuguese article, “A arte”)

What`s the art? That`s a question as old as the human sensibility. By the time that the very first man, with his primal intelligence, observed a tree and noticed on it something more than a stem that holds leafs and makes shadows against the sunlight, the humanity have started to question herself what`s that "something more". From where it entered us? What exactly does it provoke on us? What`s it’s function?

The art sensibilizes… We can`t see it with our eyes, we can`t hear it with our ears, nor we can sense it with any other corporeal sense. The art is another member of the universal forces. Immaterial, invisible, eternal. It’s the force which sensibilizes and wakens the man for the spiritual world, cause we can only really "see the art" with our own soul.

Kandinsky managed to comprove this teory on his beautiful study about the art`s spiritual essence: "The soul is a piano with numerous keys". The sensible man, while facing the art of creation, is touched by the sublime hands of the Nature, and feel himself quite satisfacted with the synphony of life, the unique universal song.

Yes, that`s the ultimate and fundamental function of art. But how many difficulties men have to perceive it!

From the ancient ages on the caverns, the art had been borned already linked to practical and material functions: The painting and sculpture served to just illustrate the world, the music served for the festivals, the architecture for the mere construction of safe buildings, the dance for the passion, the literature for the storytelling and registration of facts, the poetry for the registration of emotions and feelings... This to cite the faculties whose are intimate linked to the art.

However, in reality, the real art, the art on itself, pure and simple, have always influenciated every material creation. And have always whispered to the hart of mankind: "I`m inside of you, but you aren`t on me. You can`t create me, but I will be always present on every creation you make. And, the more sensible and sincere you are on the act of creation, more of me you will receive… And much more sublime will be your creation."

The art isn`t rational, it does not have a determined process, nor an objective to be reached. Like the german philosopher, Immanuel Kant, said: "The art is the universal without concept." Yes, to see the art is to feel, carefree, the enormous force that did create and that mantains all existance… Happy the ones whose, from time to time, forget a little about the tough journey to just sit and observe the world. Cause those ones will be really resting in peace, and how many energy they will be earning to continue determined and strong on their lives! They will be in contact with the supreme love of Nature, the love which is everywhere, and moves everything. The force which moves the world and which, while noticed, sensibilizes the hart and refuels the soul. Happy the ones whose live this way, cause those ones live with art.

It’s up to the artists to search hard for the art, search for their so beloved fountain of inspiration. But very few actually discovered that the art is everywhere, it’s the art who chooses the artist, and not the artist who chooses to be an artist! The art of every artist must come from deep inside his soul, his heart. It’s up to the artist to draw everything which he can see and feel of the world, and to study those things first inside yourself, for then, and only then, give his own vision and pass his own message… Not every artist will pass good messages, but only those really sincere to his own feelings will have the power to sensibilize.

The artist`s greatest emotion isn`t the fame, the recognizement or the wealth. We can cite various geniuses of the history of the art whose have passed their lives on complete material misery. Yes, but those ones were much, much, spiritually rich… Cause the real artist is mad about the art, can`t stop to practice it, can`t live without it, won`t change it for nothing. And those are the real artists, men eternaly seduced by the sublime beauty of the song of life.

And why just the painters, musicians, writers and professionals of this genre are described as artists? If the art is on the world, and are artists everyone of those who live with art, we may have much more real artists on our world than we can imagine.

Like the ancient greek philosopher, Platho, wrote: "Just is the man who is useful to his state and does well his function". This is the real artist, the one who is content with what he is, and who is awaken for the real side of life. Who before being an artist, had observed the art. Who before creating for the others, had create for himself. Who instead of judging the world, had tried to discover his beauty. And discovered that the art has really a function, and a vital one: The function to teach the soul for the truth, and every wonderfull thing that came from it…

Finally, if in every being there`s a mirror which reflects the light of creation, on the real artist this mirror can only be more clean, more bright and more sublime.

Image credits : an giant replica of one of Kandinsky's paintings (Weilheim, Germany).